Dimensions of Cricket, or, How Big Is It?

The graphic below of a large, green circle with a brownish square in the center is what an actual cricket field looks like. In a two dimensional world with RGB colors assigned, anyway. 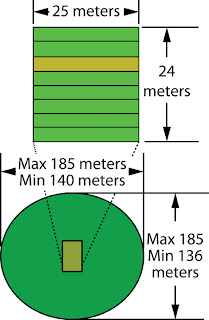 Seriously, though, this diagram shows a couple of important facts: Cricket fields are big circles and, in the center, where all the action is, there is a square where there's little or no grass.

You will notice the square in the center of the field is actually made up of several rectangular areas. That is because during a summer of playing, the brownish part where the bowling and batting take place--called the pitch--can get pretty worn out. So, there are several rectangular pitches that can possibly be prepared for use during the season. Just how all that happens isn't really important to us--at least, not right now. Later, when you're a real cricket nerd (or, as the Brits would call you, an "anorak"), we can get more into that stuff.